and Christopher Shipman and Cellucci, his other co-author, will read Battleship verse from _A Ship on the Line (Unlikely Books, 2014) 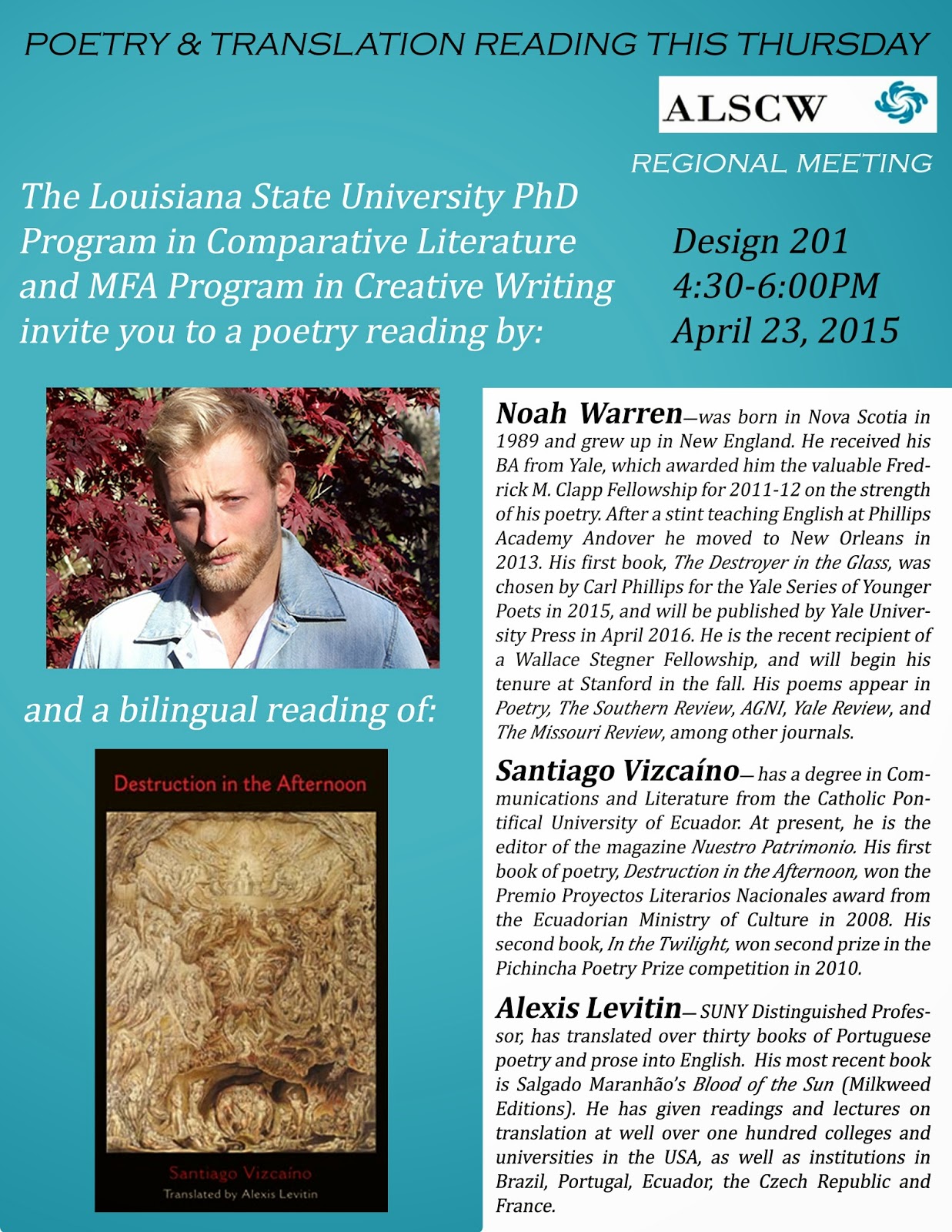 Alexis Levitin, SUNY Distinguished Professor, has translated over thirty books of Portuguese poetry and prose into English. His works include Clarice Lispector’s Soulstorm (short prose) and Eugénio de Andrade’s Forbidden Words (poetry), both published by New Directions. His most recent book is Salgado Maranhão’s Blood of the Sun (Milkweed Editions). He has received fellowships from the National Endowment for the Arts, the National Endowment for the Humanities, the Fulbright Commission, the Witter Bynner Foundation, the Gulbenkian Foundation, and Columbia University’s Translation Center, which awarded him the Fernando Pessoa Prize. As a translator, he has benefitted from residencies at the Banff International Translation Centre in Canada, the European Translators Collegium in Germany, and the Rockefeller Foundation’s Study and Conference Center at Bellagio, Italy. He has given readings and lectures on translation at well over one hundred colleges and universities in the USA, as well as institutions in Brazil, Portugal, Ecuador, the Czech Republic and France.


Santiago Vizcaíno has a degree in Communications and Literature from the Catholic Pontifical University of Ecuador. He has worked as an editor at the newspaper Hoy, at Superbrands Ecuador, and at the Office of Publications in Ecuador’s Benjamín Carrión Casa de la Cultura. At present, he is the editor of the magazine Nuestro Patrimonio, published by the Ministry for the Coordination of the Patrimony, and of various other publications, including those of the Organization of Historical Centers of Latin American and the Caribbean. His work has appeared in several magazines, including Letras del Ecuador, Rocinante, Retrovisor and Casa de las Américas. His first book of poetry, Destruction in the Afternoon, won the Premio Proyectos Literarios Nacionales award from the Ecuadorian Ministry of Culture in 2008. His second book, In the Twilight, won second prize in the Pichincha Poetry Prize competition in 2010. His work has appeared in Bitter Oleander, Chattahoochee Review, Connotation Press, Dirty Goat, Eleven/Eleven, eXchanges, Ezra, Lake Effect, Moon City Review, Osiris, Per Contra, Rowboat, Saranac Review, and Words Without Borders. The translations of all forty poems that comprise the text of Destruction in the Afternoon have been published in literary magazines in the United States. He was awarded a one-year fellowship to Malaga, Spain, in 2011.

Noah Warren was born in Nova Scotia in 1989 and grew up in New England. He received his BA from Yale, which awarded him the valuable Fredrick M. Clapp Fellowship for 2011-12 on the strength of his poetry. After a stint teaching English at Phillips Academy Andover he moved to New Orleans in 2013. His first book, The Destroyer in the Glass, was chosen by Carl Phillips for the Yale Series of Younger Poets in 2015, and will be published by Yale University Press in April 2016. He is the recent recipient of a Wallace Stegner Fellowship, and will begin his tenure at Stanford in the fall. His poems appear in Poetry, The Southern Review, AGNI, Yale Review, and The Missouri Review, among other journals.


Posted by The Exceptionalist at 10:12 AM