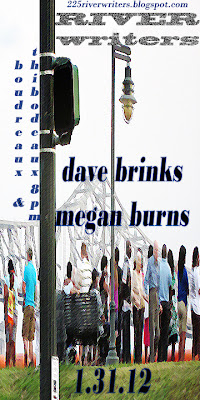 A Reading by Poets Dave Brinks and Megan Burns

Boudreaux & Thibodeaux's
214 3rd St # 2D  Baton Rouge, LA 70801-1315
(225) 636-2442
River Writers presents poets, Dave Brinks and Megan Burns at 8pm on Tuesday January 31st   at Boudreaux and Thibodeaux’s downtown Baton Rouge. Just up the river from New Orleans, these lauded poets, performers, publishers, editors and essayists bring with them the punch only great poetry can throw. The muse will show her face, and the river will expose its muddy bank. This will truly be a great reading! Come out and give an ear to the river! Read more about these impressive poets below!

Dave Brinks is a New Orleans poet, essayist, journalist and biographer. His family heritage is Acadian French and Choctaw. Brinks is publisher of Trembling Pillow Press books as well as the magazine ENTREPÔT, The Brain Trust News in Arts and Letters. He is also editor-in-chief of YAWP: A Journal of Poetry & Art, director of 17 POETS! Literary & Performance Series, and founder of the New Orleans School for the Imagination. His works have appeared in journals, magazines and anthologies throughout the United States, Canada and overseas. Additionally they have been featured on NPR, NewsHour with Jim Lehrer, National Geographic Traveler and Louisiana Cultural Vistas. Brinks is the author of six books including the critically acclaimed The Caveat Onus (Black Widow Press, 2009). His latest book, The Secret Brain: Collected Poems 1996-2012, is forthcoming (Black Widow Press, 2012). Brinks is currently working on a thorough investigative report on New Orleans' seminal contributions to American letters, art and music (1845 - present) inspired by the recent discovery of dozens of artifacts, letters, manuscripts, photographs, art works, and jazz recordings in the Bywater neighborhood of New Orleans in the summer of 2011.


Megan Burns is a poet, performer, essayist, and editor. She is an editor at Trembling Pillow Press and publishes the poetry magazine, Solid Quarter, which is dedicated to poets working in the tradition of the long poem. Her poetry has been most recently published in Drunken Boat, Trickhouse, New Laurel Review, YAWP Journal and the Big Bridge New Orleans Anthology. Her book Memorial + Sight Lines was published in 2008 by Lavender Ink. She has two chapbooks: Frida Kahlo: I am the poem (2004) and Framing a Song (2010) from Trembling Pillow Press. She coordinates the weekly 17 Poets! Featured Reader Calender. Megan has two forthcoming books of poetry entitled Sound & Basin (forthcoming from Portals Press, summer 2012) and Carville: Village of Forgotten Names. She has two chapbooks coming out in 2012 as well, "a city/ bottle boned" (dancing girl press) and irrational knowledge (fell swoop press). 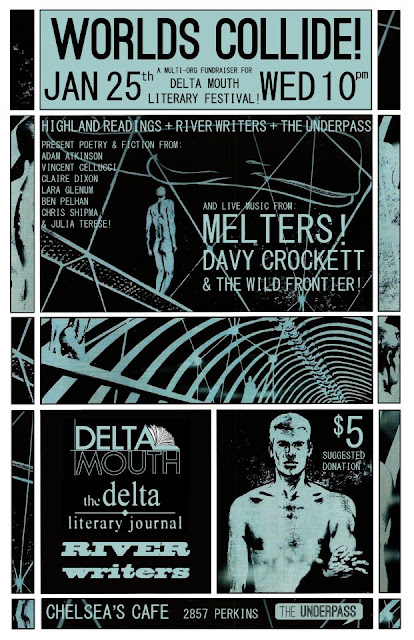 $5 suggested donation, but whatever you can spare is appreciated! All donations benefit Delta Mouth, a multi-day celebration of readings and performances during St. Patrick's Day weekend. For more information, or to donate to our Kickstarter campaign, visit www.deltamouth.com!

Posted by The Exceptionalist at 3:11 PM No comments: 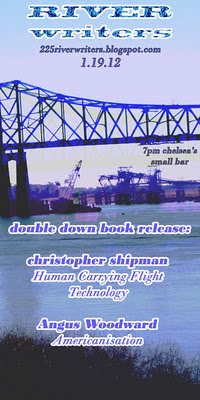 "reading of the century" river
double down book release:

The reading will begin at 7pm at Chelsea’s Café (small bar), 2857 Perkins Road, Baton Rouge LA 70808. Books will be available for purchase and there will be a signing following the reading.

More info about Angus and his work can be found at http://anguswoodward.blogspot.com/

More info about Chris and his work can be found at www.christophershipmanwritingwork.com

We hope to see you all there!

Posted by The Exceptionalist at 11:40 AM No comments:

advent calender river never goes down quite as planned
but we'll be back river at b&t for jan 31st 2012!
stay updated for other river events--
Posted by The Exceptionalist at 10:46 AM No comments: